AN OVERTURE TO THE SOURCE OF OUR CULTURAL HERITAGE : THE ‘PURANAS’ 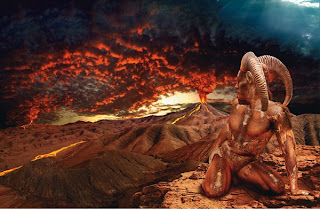 “Time present and time past
Are both perhaps present in time future,
And time future contained in time past.”
[ FOUR QUARTETS ( Burnt Norton ) : T. S. ELIOT ] 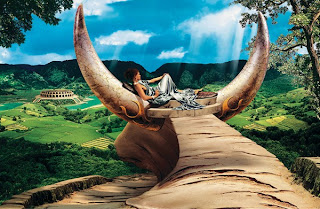 The ‘Puranas’ occupy a unique position in the sacred and secular literature of our race. Etymologically the term ‘Purana’ means “that which lives from ancient times”. Originally, therefore, the term signified “ancient tale” or “old narrative” containing the records of past events, as compared with ‘History’. Later it became associated with a class of literature. According to the classical definition of the term found in the ‘Amarakosha’ written by Amarsingha in the 5th century AD, it should have five characteristics or ‘panchalakshana’, which are ‘Sarga’ (creation), ‘Pratisarga’ (dissolution and recreation), ‘Vangsha’ (divine genealogies), ‘Manwantara’ (ages of Manus), and ‘Vangshanucharita’ (genealogies of kings). But this ‘panchalakshana’ definition can be applied only to the ‘Upa-Puranas’ (minor Puranas), and the ‘Maha-Puranas’ (major Puranas) should have ten characteristics or ‘dashalakshana’ which includes the following additional features : ‘Vritti’ (means of livelihood), ‘Raksha’ (incarnation of gods), ‘Mukti’ (final emancipation), ‘Hetu’ (unmanifest), and ‘Apashraya’ (Brahman). Apart from all these, another very elementary feature of utmost significance of the ‘Puranas’ is the glorification of ‘Dharma’ (righteous conduct), ‘Artha’ (economics and politics), ‘’ (erotics), and ‘Moksha’ (salvation), along with that of ‘Brahma’ (god of creation), ‘Vishnu’ (god of preservation), ‘Rudra’ (god of destruction), and ‘Surya’ (god of light). 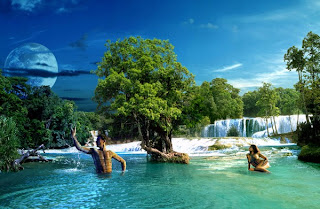 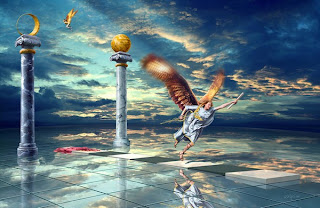 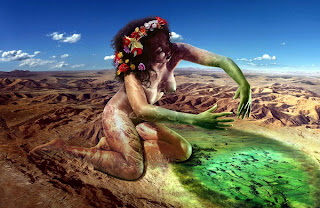 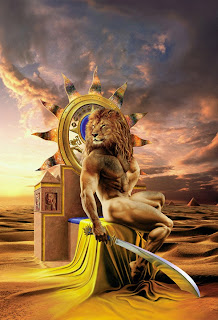 The ‘Puranas’ begin their dynastic lists with Manu, the saviour of humanity from the ‘Great Flood’. Vaivaswata Manu, the first king, had ten sons, among whom was divided the entire country. Ninety-five generations ruled between the time of Manu and the great war of ‘Mahabharata’. After the war, the ‘Puranas’ use the future tense for the subsequent dynasties. They are called “the dynasties of the ‘Kali’ age”, mentioned only in seven ‘Puranas’, where their account is traced till about the period of the historical ‘Gupta’ empires who were broken up by the ‘Huns’ in the 6th century AD. The mention of even ‘Yavanas’, ‘Shakas’ and ‘Pallavas’, who came to India in the 2nd and 1st centuries BC, indicates that the geographical lists were brought up-to-date from time to time. The division of time into four ‘Yugas’ (ages), namely the ‘Satya’, the ‘Treta’, the ‘Dwapara’ and the ‘Kali’ had a historical basis; but the chronological system of fitting in seventy-one four-age periods making a ‘Manwantara’[1] in the cosmological scheme, is purely hypothetical as well as a later elaboration, as this theory applies only to ‘Jambudwipa’,[2] and not to the whole world. Great wars, conquests or political changes may have marked the end of one age and the beginning of another. The ‘Satya Yug’ appears to have ended with the destruction of the ‘Haiheya’ dynasties and the ‘Treta’ began with the reign of ‘Sagara’. Rama, the son of Dasharatha, is said to have lived in the interval between the ‘Treta’ and the ‘Dwapara’ yug. The battle of ‘Mahabharata’ has been taken as having occurred at the close of the ‘Dwapara Yug’, and the ‘Kali Yug’ began after the war. These ages thus symbolize changes in the political conditions in . 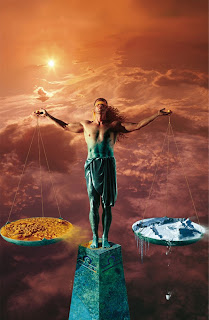 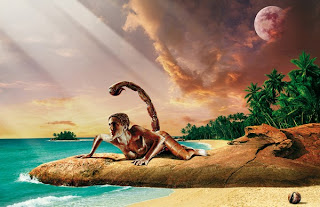 According to the ‘Puranas’, ‘Dharma’ (righteous conduct), ‘Artha’ (economics and politics), ‘’ (erotics), and ‘Moksha’ (salvation) should be the four aims of human life. ‘Dharma’ includes religious teachings. ‘Sin’, ‘Punishment’, ‘Penance’ and ‘Hell’ are described in details. The popular teaching consists of descriptions of ‘tirthas’ (holy places) and of pilgrimages, as also of ‘vratas’ (ritualistic observances) and ‘danas’ (charities) etc. The chief feature of all these is that these were available to all, including women and ‘Shudras’, to whom the ‘Vedas’ were denied. ‘Artha’, acquisition of wealth or polity, is found in the ‘Rajadharma’ section of many ‘Puranas’, dealing with the duties of kings and methods of administration, conduct of war and peace etc. ‘Kama’ includes marriage-rules, and duties of wife and women, which are illustrated by stories such as those of Sita and Savitri, who are cited as examples of perfect womanhood. ‘Moksha’ or salvation is the final goal placed before every human being. Transmigration is an article of faith; one can attain deliverance from the chain of successive rebirths by following the paths of ‘Yoga’ and ‘Bhakti’. 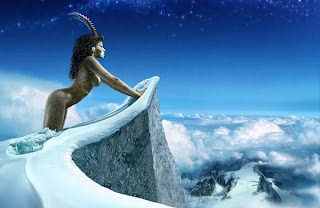 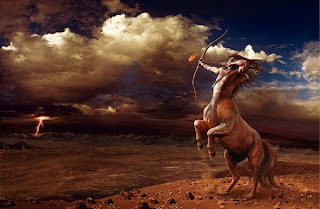 The theology preached in the ‘Puranas’ is heterogenous. The three chief gods are ‘Brahma’ (god of creation), ‘Vishnu’ (god of preservation), and ‘Rudra’ or ‘Shiva’ (god of destruction). They form the all-powerful ‘Holy Trinity’ of the gods and goddesses. ‘Surya’ (god of light) or the ‘sun’ is also very highly extolled in the ‘Puranas’ as ‘the source of all life under the open sky’. Apart from other gods and goddesses, there are ‘Gandharvas’ and ‘Apsaras’ who are respectively the celestial musicians and nymphs. Under demons are classed the ‘Asuras’, ‘Daityas’, ‘Danavas’ and ‘Rakshasas’. Among the three gods of the ‘Holy Trinity’, only god Vishnu’s ‘dashavatara’ (ten incarnations) concept is found in the ‘Puranas’; of which five are mythological : ‘Matsya’ (fish), ‘Kurma’ (tortoise), ‘Varaha’ (boar), ‘Narasingha’ (man-lion), and ‘Vamana’ (dwarf); four are historical : ‘Parashurama’, ‘Rama’, ‘Krishna’, and ‘Buddha’; while the last incarnation, ‘Kalki’, is yet to manifest. This ‘dashavatara’ or ten incarnations theory suggests the idea of the evolutionary process of the advancement of human civilization. The ‘fish’ emerges out of the early-Palaeozoic stage, followed by the ‘tortoise’ in the late-Palaeozoic times, and the ‘boar’ in the Mesozoic period. Next comes the ‘man-lion’ and ‘dwarf’ in the period of cave-men and bush-men. ‘Parashurama’ represents the nomadic and hunter stage of uncivilized, barbaric human beings; and ‘Rama’, ‘’ and ‘Buddha’ stand for the human race of full-grown city civilization. 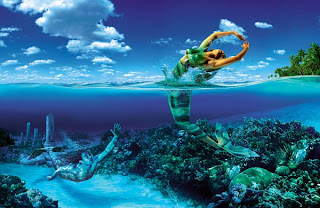 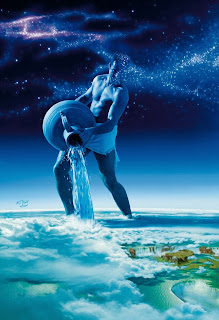 The ‘Puranas’ are closely akin to the ‘Epics’ both in form and substance. Taken collectively, they may be described as a popular encyclopedia of ancient and mediaeval Indian culture ― religious, philosophical, historical, personal, social, economical and political. The importance of the ‘Puranas’ for the comprehensive history of Indian culture and civilization is immense, as there are sections dealing with polity, sociology, administration, fine arts, architecture etc. The present view is to accept the ‘Puranas’ as one of the important sources of the traditional history of ancient . Nowadays it is considered that the function of a modern historian should be to disentangle legendary, fictitious or mythological materials from the purely historical or cultural data.
[1] The ‘Puranas’ states that a human year is the day and night of the gods; 12000 divine years or 4380000 human years constitute ‘Chaturyuga’ (four ages) or ‘Mahayuga’ (great age) which is divided into four ages of progressive deterioration in the ratio of 4:3:2:1, respectively for ‘Satya’, ‘Treta’, ‘Dwapara’ and ‘Kali’. Each of these ‘Yugas’ is preceded and followed by ‘Sandhyas’ containing a tenth of the period of a ‘Yuga’. 1000 ‘Chaturyugas’, that is 4380000000 human years are equivalent to a day or night of Brahma, which is called a ‘Kalpa’ (aeon). Each ‘Kalpa’ comprises the periods of 14 Manus, the fathers of humankind, each of whom presides over 71 ‘Chaturyugas’; and each span of such 71 four-age period ruled by one Manu, is called a ‘Manwantara’, the reign of a Manu.
[2] According to the ‘Puranas’, the world is said to consist of seven concentric continents separated by encircling seas of different substances such as butter, milk etc. The innermost of the seven continents separated from the next by salt-water is ‘Jambudwipa’, which alone was subject to the law of ‘Chaturyugas’. The most important region of ‘Jambudwipa’ is ‘Bharatavarsha’ or , so called because the descendants of king ‘Bharata’ reside there. ‘Bharatavarsha’ lies to the north of the ocean and the south of the snowy mountains containing seven main chains of mountains named ‘Mahendra’, ‘Malaya’, ‘Sahya’, ‘Sukimat’, ‘Riksha’, ‘Vindhya’ and ‘Paripatra’. The ‘Kiratas’ live on the east, the ‘Yadavas’ on the west, and the ‘Brahmanas’, ‘Kshatriyas’, ‘Vaishyas’ and ‘Shudras’ in the centre of ‘Bharatavarsha’.
Posted by COPROLALOMANIAC at 2:40:00 pm